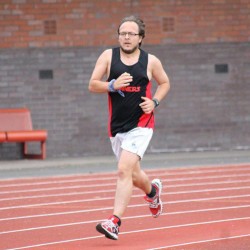 Follow Me
Steve Claringbold
My name is Steve Claringbold and I’m a 35 year old Husband and Father of Two. I’m a run leader, membership secretary and volunteer coordinator for my running club DH Runners as well as a fundraiser for Cure Rett. By day I’m a duty controller for a rail operating company and the rest of my time is spent running, watching wrestling, watching Doctor Who, reading comic books as well as reading magazines about running...you know, all the geeky stuff. But most of all I love spending time with my family. You can find my blog on WordPress at: http://runmoderatelysizedmiddleagedduderun.wordpress.com

Follow Me
Latest posts by Steve Claringbold (see all)

Where do you find the time?

It’s a question I get asked a lot. Sometimes people are just genuinely curious and other times I feel that people are criticising my choice to spend so much time training and competing.

If you’ll indulge me I’ll let you into a little background regarding myself.

My name is Steve Claringbold and I’m 35. I’ve been running competitively since 2009 with my main goal at the time being to lose weight and get fit. Our son had been born in 2008 and I wanted to be able to keep up with him as he grew and got more mobile.

I started to take things more seriously in 2011 where I stepped up from 10k’s to half marathons. My intention was to never take part in a marathon. But with a few half marathons under my belt that was precisely what I found myself training for in 2013.

My wife was cool with this as I stated time and time again that I needed to scratch the itch and get a marathon under my belt. I repeatedly told her during training that I would only ever compete in one marathon whether I finished or not.

With Chester Marathon completed in 2013 with a time of 4:20:17 I was adamant that I was going to be one and out with regards to marathons. Gradually, as I reflected on my performance on the day my mind went on overdrive as I sat back and thought about where I could’ve performed better.  And so, in 2014 another bash at Chester Marathon was necessary. Training went a bit more advanced as well as I started following an advanced marathon plan compiled by Pfitzinger and Douglas. I was all in this time as I knew this would be my last attempt at marathon distance and I had to make it count.

And make it count I did with a time of 3:49:22. The marathon itch had been well and truly scratched.

Except it hadn’t really. I knew this to be the case and so did my wife although neither of us acknowledged it at the time.

With 2015 on the horizon my initial plan was to train for 10k’s and do speed work in an attempt to break 45 minutes for the 10k distance. However, getting involved with a the charity Cure Rett and fundraising it eventually saw me compete in the Manchester Marathon as well as start training for and competing in Triathlons at Blenheim, Carlisle and London respectively. With Dublin Marathon on the horizon in October and the ultimate goal being Ironman distance in 2017 things don’t look like easing up anytime soon.

Did I mention that I’m heavily involved in a local running group as well? I’m the membership secretary and run leader for DH Runners based in Carlisle.

Did I also mention that I have a full-time job as a rail controller?

And did I also mention that I’m now a father of two children. A six-year-old boy and a 9 month old girl as well as a husband to my childhood sweetheart?

I’m sure the question you’re all asking by now is why are you telling us this Steve?

Simple, I’m telling you this because despite everything I do running wise I still find time to spend time with the family.

How do I do this?

I don’t sweat the small stuff that’s how.

Will my marathon times suffer because I’ve taken my son to the cinema rather than run the 6 miles I was meant to that day? Potentially but I don’t care.

It’s ok to miss a run here and there. In fact I’d say it’s positively good for you in the long run. Your family is your backbone. These are the people who are going to support you in your goals. Don’t push them away while you’re training but embrace them. Hold them close and let them achieve your goals with you. A day off from training while having a laugh and a joke with your family as you walk along the beach. I can think of no better times.

How else do I do it?

I run to and from work to get the mileage in. I’m going to work anyhow and I have to get home at the end of the day so I try to do as much as I can then so I can spend time with the family after work.

I try to get my long runs over and done with on a Sunday. Early starts mean that I can spend the rest of the day with the family.

I love my family and they are my support system. The boy loves watching me compete and has started running fun runs himself as well as taking in the odd parkrun. My wife loves watching me achieve my goals. The only thing she doesn’t like is talking about running all the time. I’ve come to accept that my wife will never be a runner as she just has no interest in it. She loves the fact that I love it and that’s where her interest in it stops.

The main thing to remember is that while you are creating memories for yourself by running and competing you have to also create positive memories for your kids. They’re only young once and the last thing you want is for them to grow up resenting the fact that you were never there.

One thought on “The Imperfect Perfect Fit”

Money Tips for Each Stage in Your Child’s Life